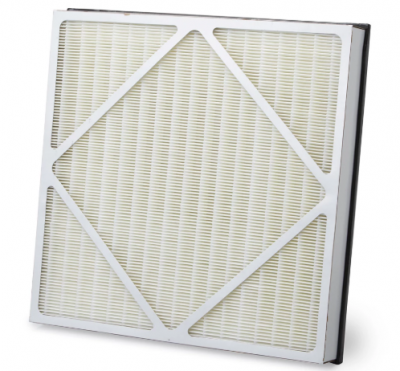 (From the Rochester Business Journal // July 23, 2020) As the Rochester region and the state slowly begin to stabilize from the pandemic and businesses consider how and when they might reopen under Gov. Andrew Cuomo’s directives, experts say air quality and filtration play a crucial role in those decisions.

“Anyplace where people are coming in and out, and employees working for an extended period of time, really needs to think about how to create safe air in this post-COVID world,” said Christopher Fox, owner and president of R.P. Fedder Industrial LLC, a Rochester-based supplier and manufacturer of custom filter solutions. “It manifests itself most dramatically in large indoor spaces where many people gather, like a mall, which is why there are directives about malls.”

Indoor air quality will be a concern for other gathering spots, like schools and gyms, Fox added.

“There’s a reason why bars, restaurants, churches, clubs and indoor arenas are hot spots, places where people will spend an hour or two,” he said. “If the owners of those places can understand the science, understand what’s behind the risk, then the actions they take to create a safer environment will make sense and they’ll be more inclined to take them.”

In April or May, Fox noted, the Centers for Disease Control and Prevention, the American Society of Heating, Refrigerating and Air-Conditioning Engineers and others offered guidance for building owners and managers on actions they should take to reduce the potential for transmission of the virus in indoor spaces based on suppositions about how the virus might be transmitted.

A recent scientific brief from the World Health Organization states that “outside of medical facilities, some outbreak reports related to indoor crowded spaces have suggested the possibility of aerosol transmission, combined with droplet transmission, for example, during choir practice, in restaurants or in fitness classes. In these events, short-range aerosol transmission, particularly in specific indoor locations, such as crowded and inadequately ventilated spaces over a prolonged period of time with infected persons, cannot be ruled out.”

It has since become widely accepted that indoor, airborne transmission of COVID-19 is a material risk because while droplets that are 5 to 10 microns in size typically settle within three feet, small droplets of roughly 0.1 micron may evaporate, leaving aerosols suspended in the air.

With the primary mode of transmission being the exchange of droplets, it is possible for someone who is infected to expel millions of droplets of infected mucus and saliva through a cough or a sneeze. Some studies have shown that droplets can travel as far as 27 feet through a sneeze, particularly smaller droplets that can, in turn, attach to dust particles.

Even breathing and talking expel hundreds, or even thousands, of droplets. And the longer the exposure to those  droplets, the higher the virus transmission risk.

“When we do social distancing and use masks, most droplets will fall to the ground within six feet. Masks capture many droplets and many others drop within six feet,” Fox said. “We now know that smaller droplets can linger in the air, they can attach to dust particles or linger as aerosols and stay afloat with the air currents in the room or move about. Some of those virus particles will linger in the air and remain a threat for hours.”

In indoor space, Fox and others contend, if the virus is allowed to remain lingering in the air, people hundreds of feet away could inhale that air.

“If I’m a business owner and I’m sitting in my nail salon all day, I would certainly want to know what I could do to reduce my risk and the risk of my employees that are there for eight hours,” he said.

In fact, a July article from McKinsey & Co., a global strategic management consulting firm, suggests that modifications to heating, ventilation and air-conditioning systems could help reduce the spread of COVID-19 by purifying air, improving ventilation and managing airflow.

Since March, R.P. Fedder has been advising its clients to do just that. First and foremost, Fox said, is adhering to the mask and social distancing guidelines offered by medical professionals in order to capture the larger droplets.

Beyond that, there are a number of ways in which businesses can help their employees and clients stay safer, Fox said, particularly where smaller droplets are concerned.

“There are a lot of things they should do anyway to create better air. One of the first things anyplace can do is open the windows, introduce more fresh air and not recirculate the air as much,” he explained. “Just the introduction of fresh air will reduce the concentration of virus-infected particles in the air.”

Another thing building owners and small businesses can do is create physical barriers that keep air from moving from one space to another, Fox said. Most important, he said, might be the installation of improved air filters.

“If the virus’ small droplets can attach themselves to dust particles and those dust particles can move through the room and the air system, filter out those dust particles so there are fewer of them for the virus to attach to,” Fox advised. “Better air filtration in these heating and air conditioning systems will absolutely reduce the risk of transmission.” 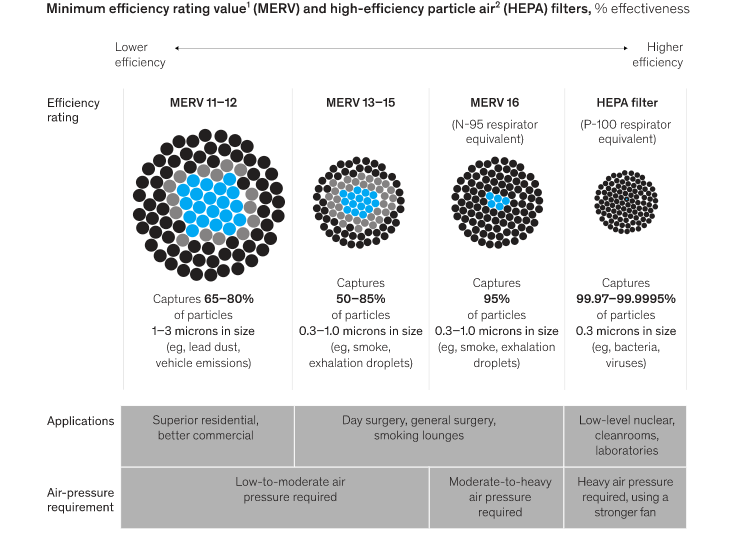 In the air filtration industry there exists an efficiency scale called Minimum Efficiency Reporting Value, or MERV. Higher MERV ratings mean more dust particles are removed from the air. MERV 13 is the highest rating for residential HVAC systems, but commercial buildings can install MERV 16 filters, which filter out 95 percent of small particles. Fox likens the filter to the N95 masks that health care workers wear.

“Most building systems would have done MERV ratings in the 8-12 range,” Fox said. “If they can, they should increase the MERV filters. The tighter the filter the more air pressure needed and the systems only have so much to give. So there’s a limit to what a system can do.”
But R.P. Fedder also suggests a backup in the form of air purifiers, which the company itself uses in its conference room and breakrooms.

“If, for whatever reason, I either don’t control the air handling system or there are technical limitations to it, what can I do? One of the things I can do, especially in smaller spaces, is to install an in-room air purifier,” Fox suggested. “They’re the size of a dehumidifier and they’ll create circulation in the room to pull the air in, put it through a HEPA filter and clean out the air.”

R.P. Fedder has sold a number of air purifiers to hospitals and long-term care facilities for their lobbies, hallways, nursing stations and anywhere that people gather or where there is traffic, Fox noted.

Lastly, Fox advised the more elaborate UV-C light technology that can be used in air purifiers and duct work. “UV-C alters the DNA so a cell can’t replicate. A virus isn’t dangerous if it can’t replicate,” he explained. “The purifiers we sell have both HEPA filtration to capture the particles and then UV-C light after the filter to capture anything else out there and sterilize it. Those are the types of things you can put in small spaces.”

Fox is advising customers to begin thinking about fall and winter, when the weather may determine our ability to open windows for air circulation.

“That’s when whatever your strategies are in creating better indoor air space need to be in place because that’s when you’re going to be most dependent on it,” he said. “Some of these systems, the in-room air purifiers, hospitals have been buying them left and right. The lead times for the devices that are truly efficacious are huge. Small businesses for now can leave their windows open, but if they want to do something to keep their space safe come October, they’ll need to consider making that purchase soon so it shows up by October.”

We are here to make sure you select the right solution for your needs. Need more details? We’ve got ’em.